Five Trends That Shaped a Decade

Five Trends That Shaped a Decade

As 2019 has come to an end, I am going to use this time to look back and to look ahead. The 2010’s were a transformative decade for retail. While Retailmageddon didn’t exactly come to pass, we saw a significant slowdown in physical brick and mortar retail growth and an unprecedented number of retail store closures. From a macro-standpoint, I can point to these five significant trends that shaped retail as we know it coming into a new decade.

After a crippling recession in 2008-09, retail sales rebounded and drove sustained growth through the decade. Overall sales grew as the overall US economy flourished, driven by positive consumer sentiment and historically low unemployment. As retail sales approach nearly $5 trillion, retail (and consumer spend) has been the engine of the US economy. 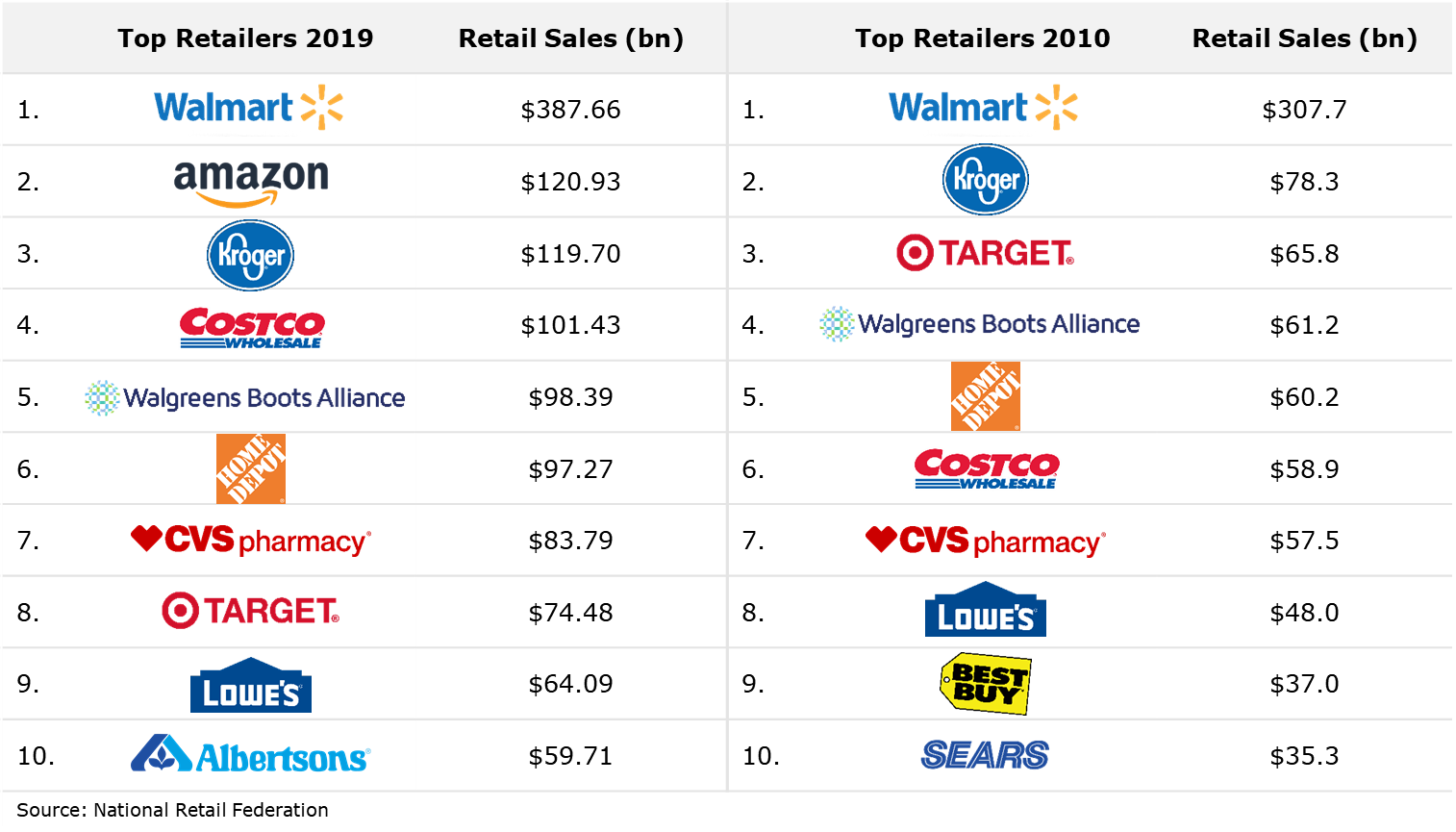 2.The rise of Amazon and e-commerce.

If we look at the changes in the top 10 retailers over the past decade, there is one company in particular that sticks out. Amazon is now the second largest retailer in the U.S. and remains one of the fastest growing as well. While the rest of the top 10 remained constant (Walmart was and most decidedly remains the big kid on the block), Amazon’s meteoric rise has changed the complexion of retail. And with Amazon comes the subsequent growth of e-commerce. While now accounting for around 10% of total retail sales, its double-digit growth rate and disproportionate impact on key categories (books, electronics, apparel) has altered the retail landscape. As e-commerce approaches 20% plus of sales within a category, the impact on retail has been profound. 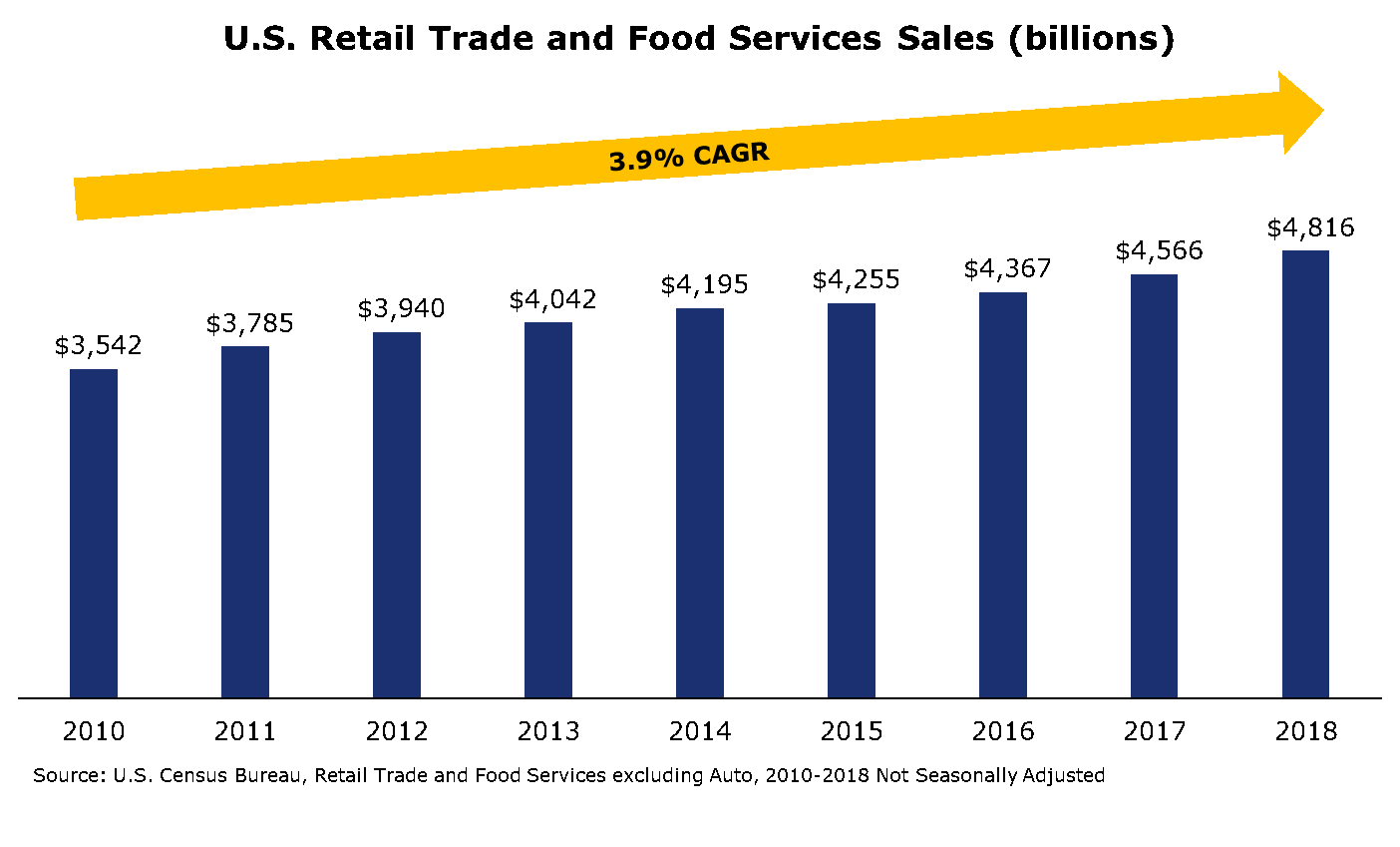 3.The collapse of the middle—the everlasting move to value.

Retail success has been disproportionally weighted to the extremes. Those companies who have demonstrated that they can provide real value for the consumer have been winners over the past decade. Walmart and Costco, of course, are demonstrations of this trend. If we look beyond the top 10, three retailers in particular stick out. TJX, Aldi and Dollar General all show up in the top 20 in sales and all continue to be on growth trajectories. The move to value is nothing new in retail but this decade exacerbated the trend, even during strong economic times.

4.Private equity and its impact on retail economics.

Private equity played a meaningful role in the past decade in the world of retail. And not necessarily to its benefit. Most of the notable bankruptcies during the past decade have seen a private equity component associated with it. Toys R Us, Sports Authority and Gymboree are three examples of retail bankruptcies during the decade that had significant private equity ownership. While private equity alone is not responsible for the disappearance of these chains, high debt levels and leverage makes it difficult for retailers to maneuver during difficult times. Private equity played a prominent role (and likely will continue to do so) in the flexibility of retail firms to survive during difficult times.

5.The power of the consumer.

In the end, the biggest influence on the world of retail over the past decade is the increasing power of the consumer to efficiently vote with their wallets. The conversation with the consumer has moved from a one-way advertising model to a holistic feedback loop. Purchasing is now fluid, no longer tied to a particular geography. This means that anyone with a good idea can sell to any consumer around the world. Direct to consumer brands can bypass traditional supply chain, distribution routes and channels to appeal directly to the consumer. The biggest drivers of this change are both technologies that began in the 2000’s but took off in the past decade. Smartphone usage boomed this past decade, with 265 million users in the U.S., four times what it was in the beginning of the decade. Social media usage also nearly doubled as a percentage of the population using various platforms as well as the time spent online. This has given customers new ways to interact and communicate with brands and retailers.

In the next blog, I will look at the future of retail. Where will we head in the next decade and what retailers will need to do to be prepared.